60% rain for Beaumont Tuesday with a couple nights at 54! Ill take it!! Praying no more storms this year for anyone.
Mike
Beaumont, TX
(IH-10 & College Street)
Top

This fall equinox front will clear out the chance of tropical cyclone visits for the year.
Top

This fall equinox front will clear out the chance of tropical cyclone visits for the year.

Good news! I am 100% ok with that! My house/property getting damaged in Rita, Ike, Harvey, Imelda, Beta, Laura, Delta, I wish this front would end all tropical mischief forever and I would be ok with that. Lol
Mike
Beaumont, TX
(IH-10 & College Street)
Top

Anyone else annoyed when tv Mets call these fall fronts "cold fronts"? Like this one coming in tonight. It's not cold ..its a COOL front..lol maybe I'm just nit picking but it's annoying

Well, the men and women the HGX NWS call it a cold front...LOL

.AVIATION...
Some shallow patchy fog could reduce visibility at TAF sites
through 15z but the fog will burn off quickly leaving VFR conds
for much of the day. A cold front will approach the area during
the afternoon and cross the northern TAF sites around 21z, the
Houston terminals around 00z and coastal TAF sites around 02z.
The front will bring scattered showers and isolated storms but
coverage will not be widespread enough to warrant a prevailing or
TEMPO group. Winds will become north in the wake of the front and
will increase. Will carry gusts for coastal TAF sites. 43

Some patchy ground fog will reduce visibility to below 3 miles in a
few locations early this morning but widespread dense fog is not
expected. At 07z, a cold front extended from the western Great Lakes
to near Oklahoma City to Wichita falls to Midland. The cold font is
expected to make steady progress to the S-SE today as a long wave
trough deepens over the Central Plains and pushes eastward. Most of
the day looks dry as weak capping in the 850-700 mb layer holds
tough. But by late afternoon strong heating and some mid level
cooling associated with the upper trough will allow for scattered
showers to develop between 20-22z. The strong differential heating
will also allow for a weak sea breeze circulation to develop. By
late afternoon, PWATs will average between 1.75 inches over the
north to around 2.15 inches south. Surface winds become SW-W ahead
of the front over the northern half of the CWA and low level
convergence is kind of weak as the front pushes south. However, once
the front gets to around I-10, convergence will strengthen as the
front collides with the sea breeze. CAPE values are between 2000-
2500 J/Kg with LI values around -6 but lapse rates look weak. SE TX
will lie in a departing RRQ so considering the relatively decent
convective parameters in place will mention thunder and there could
a few isolated strong storms over the southern half of the CWA.
Tapered PoPs lowest over the NW zones and higher toward the coast
for late this afternoon into this evening. MaxT values will again be
on the warm side today as 850 temps remain near 22 C which
translates to mid/upper 90s at the surface.

Showers and storms will end over the north by mid evening and around
midnight at the immediate coast with skies clearing from NW to SE.
Weak cold air advection will develop in the wake of the front but it
won`t feel like fall just yet. MinT values will only cool into the
mid 60`s north near 70 south as winds aid in mixing a bit.

Wednesday looks like an absolutely gorgeous first day of autumn. The
equinox will occur at 221 PM CDT and MaxT values will reflect the
changing of the seasons with high temperatures only in the lower and
middle 80`s as 850 mb temps cool from 22.0 C to 13.0 north and 15.7
C south. Fcst soundings don`t show any saturation so went with sunny
skies. Dew points will mix out quite a bit with dew points falling
into the 40`s yielding RH values between 20 and 35 percent. Winds
will also be on the strong side as the gradient remains tight in
response to building high pressure. The combination of strong winds
and low RH will create dangerous fire weather conds on Wednesday.
See Fire Weather section for more details.

High pressure will bring clear skies Wednesday night. Winds are
expected to decouple so the combination of dry air, nearly calm
winds and clear skies will set the stage for the coldest night so
far this season. MinT values will like fall into the 50`s areawide.
43

High pressure will stay in place for several days throughout the
long term. Dewpoints will stay in the 40s and 50s through
Saturday, bringing a much needed relief to the humidity we`ve seen
recently. Mostly clear skies will stick around while temps max out
in the 80s through Saturday and overnight lows cool to the upper
50s to lower 60s. By late Saturday/early Sunday, temps and
humidity gradually climb once again as high pressure begins to
push off to the east. Global models diverge afterwards regarding
rain chances for Sunday onwards, but a steady increase in rain
chances is expected early next week. Southeast Texas will be
between a trough over the eastern US and a mid level closed low
over the southwestern US. The intensity and placement of both
these features will alter our rain chances locally. Therefore,
kept a blended option between global models until more of a
consensus is reached. KBL

Winds will be light and variable this afternoon as a front
approaches our coastal waters. This front should reach the coast
in the late evening and push offshore. In its wake strong NE winds
will reach SCA criteria around midnight tonight and seas will
build to 4-6 ft. NE-E winds will begin to diminish by late week
and into the weekend and seas will subside by then as well. By
Sunday as high pressure moves out, moderate onshore flow resumes.
KBL

On Wednesday, the air mass will be very dry in the wake of today`s
front. Surface dew points will mix out into the 40`s with high temps
in the lower 80s. This will create RH values near or below 25
percent over much of the region. The low RH coupled with moderate to
occasionally strong north winds will produce dangerous fire weather
conditions, especially over the northern CWA where it has been
considerably drier than the south this month. College Station and
Huntsville have received 0.24 and 0.40 inches of rain respectively
while Houston Hobby has received 6.55 inches of rain. KBDI values
over the north (north of a Columbus to Navasota to Trinity line) are
between 600-700 which is another indicator of how dry it`s been.
Burn Bans are in effect for Colorado, Madison, Walker and Waller
counties. Use extreme caution if working with flammable materials on
Wednesday. 43 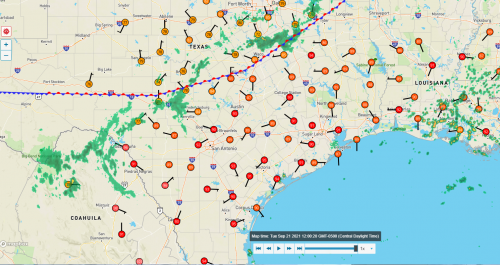 I bet that front is going to induce a lot of burn bans.
Top

Too bad the nice weather will only be a round for a few days before summer returns, these fronts always tease us
Top
Post Reply

Users browsing this forum: No registered users and 20 guests