Expect scattered showers and IFR CIGs to continue through tomorrow
morning across the area. Through the rest of the day today, the
heaviest rain showers will remain north of the area along a
boundary. This boundary will move through late tonight bringing a
better chance of precipitation, but it will be weakening as it
pushes through. So, the sites that have the best chance of
getting SHRA will be CLL, UTS, CXO, and IAH. Overnight tonight
CIGs will remain around 5000 to 7000 feet, but ceilings do rise
tomorrow afternoon to MVFR as the front moves off the coast.
Breezy northerly winds will be expected starting tomorrow
afternoon through tomorrow night.

The front has finally passed through all of Southeast Texas and
has pushed out over the Gulf, finally bringing an end to the fog
event for the entire area, with the exception of some Gulf waters
several miles offshore.

Despite this, look for rainy conditions to continue. Like
yesterday, expect the most rain north of Houston - perhaps from
roughly Brenham to Livingston northward. For the rest of the area
south of that line, another cloudy day with sprinkles and mist are
likely, along with some chance of briefly seeing a light rain
shower. Look for stronger rain potential to drift coastward
tonight into Thursday before things clear out Thursday night.

Beyond that bit of fair weather, look for two more shots at rain.
One this weekend, in a window from Saturday night through Sunday
night. If moisture remains high, another disturbance will bring a
second shot at rain closer to mid-week.

Cooler temperatures and periods of rain can be expected across
Southeast Texas today through Thursday. Will continue to carry
the higher rain chances up north and the lower rain chances at
the coast today, then increase the chances across the area for
tonight through Thursday morning. Similar to yesterday, there
remains the possibility for some locally heavy rain to develop
for parts of our northern counties where any training of cells
happens. Rain coverage will decrease (generally from north to
south) on Thursday as strong high pressure settles in from the
north. North winds will be strengthening during the day and we
might get close to wind advisory levels near/along some of our
coastal counties during the day on Thursday.

By Thursday evening, we`re still looking for waves of vort blobs
making their way though the upper atmosphere above the remnant
frontal zone above the surface drifting slowly coastward. Guidance
continues to suggest that it will drift south enough to push the
best convergence for light to moderate rain showers offshore,
letting land areas dry out Thursday night. Expect the waters to
follow shortly thereafter as deeper dry air forces its way in, and
northwest flow aloft finally sets up due to ridging to our west.

This should give us a good shot at fair weather on Friday into
Saturday, though temperatures will likely be cooler than typical
for mid-to-late February. However, that is not likely to persist
deep into the weekend, as onshore winds are expected to return
Saturday.

An upper trough looks to head due east from the Desert Southwest
into the Southern Plains, inducing lee cyclogenesis around the
Panhandles on Sunday. This should give us a moisture and lift
connection with the Pacific at high altitudes again, while
boundary layer moisture returns with the onshore flow. So...you
probably guessed it...this turn of events should give us more
seasonable temperatures, but also a return of rain chances. I keep
some potential for showers in place as early as Saturday evening,
but guidance seems to be slowly coming into shape on the best
chances coming late Sunday afternoon into Sunday evening. The Euro
still comes through strong with a late weekend front - the GFS is
beginning to come around to that as well, but is still much
slower. For now, will continue to keep the forecast more Euro-ish
and going dry on Monday, but I do keep the PoP window spread wider
than I expect it will end up being due to uncertainty in timing
at this range.

Beyond that...well...good luck in determining a cohesive
narrative. There`s broad consensus in another stronger northern
stream trough moving through the Central US in the midweek, but
there`s precious little agreement on the strength of that trough,
or precise timing. Both will have significant implications for
weather in our area. We could see another front like at the
beginning of the week, complete with rain chances. Or, we may see
something more like a reinforcing front pushed by a mass of
colder, drier air. For now...I`m basically going with a blended
forecast of least regret, with modest temperature changes and
20-30 percent PoPs. As confidence grows (hopefully!) in a more
specific scenario, expect the forecast to trend in the direction
that confidence brings us.

A cold front will continue to slowly move across the coastal
waters today. Decreasing fog coverage can be expected behind
the front. As strong high pressure builds into the area from
the north, look for strengthening north winds beginning late
tonight or early on Thursday. Caution flags will likely be
needed for the increase in winds and building seas. Stronger
north winds and rough seas can be expected late Thursday
afternoon through early Friday morning with gale force wind
gusts possible. Seas will come down and winds will diminish/
return to the southeast on Saturday. The next cold front is
expected late Sunday night or early Monday morning.

Despite the cold front already having crossed the area, unsettled
weather with high rain chances will persist through today and into
tomorrow before finally coming to an end. Similarly, the typical
post-frontal increase in winds should also be delayed, but still
looks to come Thursday afternoon/evening, while lingering rain
showers may still be in the picture, and conditions will be
further mitigated by previous rainfall and cooler weather
mitigating a drop in moisture, keeping relative humidity high.
Warmer temperatures on Friday should allow for lower humidity
values that afternoon. but mitigating factors are still present,
as all but fine fuels are likely to be fairly moist and winds will
also be weaker. The expected decrease in humidity and moderate wind
speeds may be favorable for prescribed burning, but that
determination - as always - will ultimately depend on multiple
factors beyond merely weather.

Well, I was hoping to get about an inch out of this (see map, previous page) and now I'm wondering if I will see anything more than this drizzle.
Top

Yikes!! Forecast for tomorrow night has dropped to 32!!
Top

It sure is chilly in that wind.
Top

Its cold morning with temps in the mid to upper 30s inland and low to mid 40s across across the Upper TX Coast. Winds are still gusty across the coastal counties. The skies have finally cleared overnight so enjoy the sunny skies today. 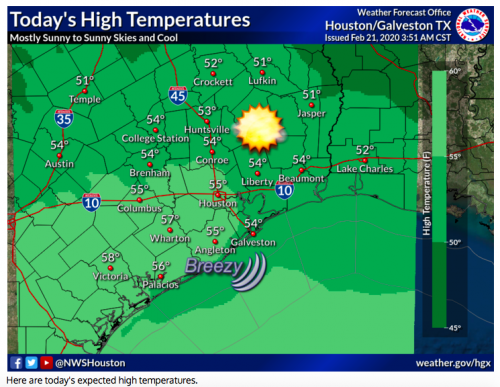 The slow southeastern movement of the large 1040 mb Southern
Plains High into the state will weaken this recently strong
offshore pressure gradient. This will gradually lower surface
northerlies to under 10 knots through the day. A northern 1.3 to
1.5 inch pwat air mass descending into eastern state will lower
mid to lower level humidity to 50% or under and ensure mainly
clear skies through early Saturday evening. High cloudiness
Saturday as cirrus rides up and over transitory upper ridging.
While northerly winds will significantly weaken under sunny skies
today, cold air advection will keep today`s temperatures cool; mid
to late afternoon low to mid 50s. Weak easterly breezes and mainly
clear early Saturday morning skies will allow for decent radiative
cooling; interior lower to middle 30 / coastal lower 40 minimum
temperatures. Early Saturday easterly winds will gradually veer
back onshore by the late afternoon and assist in warming daytime
temperatures back up to near 60 F. 31

High pressure continues to move off to the east and onshore winds
strengthen Saturday night and Sunday resulting in increasing
clouds and rising humidities. Some showers might pop up Sunday
afternoon and evening way up north, but the area`s next best rain
chances look to come late Sunday night through Monday with the
approach and passage of our next cold front. Before the front`s
arrival, a warming trend can be expected (highs most locations in
the 60s on Sunday and in the 70s on Monday). After a cool Tuesday
morning in the wake of the front, we should warm up back close to
70 before the next front moves through the area (it should be too
dry for any rain with this boundary) and cools us back down. A
general northwest flow aloft behind this front will bring our area
cool temperatures (lows mainly in the 30s/40s and highs mainly in
the 50s/60s) and dry weather with mostly clear to clear skies for
the remainder of the week. 42

Early day Gulf wind gusts have remained under gale force. Therefore
have lowered the Gulf Gale Warning to a Small Craft Advisory and
have kept the local bays in a Small Craft Exercise Caution.
Weakening northerlies through the day will have nearshore Gulf
Advisory flags dropping off early this afternoon...offshore flags
expiring at sunset. Morning significant wave heights in the 5 to 6
feet nearshore...7 to 9 ft offshore range will fall to around 3
feet nearshore and 5 to 6 feet offshore by this evening. Weak
east- southeast winds Saturday will create 2 to 3 foot seas with a
strengthening onshore flow Sunday picking early week average seas
back up to around 3 to 4 feet. There will be two frontal passages
next week; a weaker front Monday night followed by a much stronger
frontal passage 24 hours later Tuesday night into Wednesday morning.
Offshore winds late Monday into Tuesday may briefly touch Caution
criteria but a much colder air mass following behind the mid week
cold front will significantly strengthen northerlies and elevate
seas. 31

Great, so now after bedtime, they lower it back to down 32. SMH.
Top

My low was 36.4. 4 degrees warmer than expected, but I’ll take it. Hopefully that’s the last of the freeze scares, although I just checked and see a forecast low of 33 next Wednesday. Everything is blooming now, even the Azaleas. Don't want a freeze at this point.
Top
Post Reply