After yesterday's record highs; the strong cold front has pushed off the Upper TX Coast and temps will continue to drop throughout the day. Scattered showers continue to move across SE TX this morning and a Wind Advisory is in effect for the Upper TX Coast including the Houston-Galveston areas until 9PM tonight. A Gale Warning is also in effect for the coastal waters. Beautiful dry cool weather arrives Wednesday morning through the weekend with a slow warming trend. Highs in the low 70s with partly to mostly sunny skies will make for another perfect weather weekend. 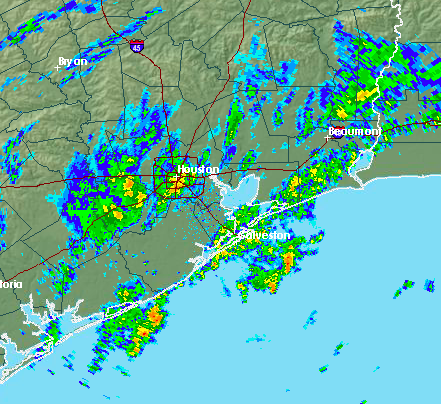 .AVIATION...
Expecting to see the MVFR ceilings near the coast to spread inland this
morning and maybe become IFR, and also expecting to see expanding areas
of mainly -SHRA/-RA (some -TSRA cannot be ruled out, but not confident
enough to include in area TAFs). N winds behind the early morning cold
front will be around 15 to 25 knots inland and 25 to 30 knots near the
coast, with higher gusts areawide. Rains will come to an end from west
to east late this afternoon through early this evening, but ceilings
might take a little longer to lift and clear out with MVFR conditions
possibly persisting until late tonight or early tomorrow morning.
VFR tomorrow. 42
&&

A very strong cold front is pushing through Southeast Texas
tonight with a broken line of showers. In its wake, look for gusty
north winds and temperatures to stay steady or fall through the
day today. This means most locations have seen their high
temperature for the day already. Additionally, expect widespread,
generally light showers to fall across Southeast Texas today,
gradually ending from northwest (late this afternoon) to southeast
(this evening).

After today, look for generally quiet weather for the next several
days with temperatures with cool temperatures slowly rising into
early next week, when another cold front will bring our next
chance for rain and colder conditions.

The cold front is moving off the coast early this morning.
At 3 AM, temperatures have fallen into the lower 50s north
and remain in the low to mid 70s at the coast just ahead
of the front. These readings will continue to fall as the
day progresses and will be accompanied with areas of rain
and embedded showers (and maybe an isolated thunderstorm
too). Gusty north winds are expected with breezy conditions
inland and windy conditions closer to the coast (where wind
advisories will be in effect). The rainy conditions will
come to an end from west to east beginning later this after-
noon or early this evening, and anticipate all activity to be
off to our east tonight. Mostly clear skies and much lighter
winds will help to set the stage for a cold night tonight
with near freezing temperatures possible across parts of our
far northern counties. Closer to the coast, low to mid 40s
are anticipated. Wednesday will be cool and dry with mostly
sunny skies.

By Wednesday evening, the potent upper trough fueling continued
showers in the short term will have moved to our east, with
northwest flow aloft and northeast winds at low levels providing
us with something close to a Wednesday repeat on Thursday. Under
a clear sky, expect overnight lows to remain cold into the
morning, but should allow for slightly warmer highs.

Very weak reinforcing fronts look to slide into the area both on
Thursday night and on Saturday as high pressure tries to
build over the region. They should largely be ineffective, but
could allow for some showers over the Gulf and possibly the
immediate coastal areas Thursday night. Despite these fronts,
look for the sustained warming trend to continue through the
weekend with offshore or variable winds.

Early next week, another upper trough will move in from the west,
and look for a line of showers and some thunderstorms to drive
down from North Texas on Monday. Keep an eye on temperatures
behind this front, as there`s generally good guidance in an arctic
airmass advecting in. For now, there`s also good consensus for the
coldest air to slide east of us before making it to our latitude,
so the temperatures in the forecast are cold, but not very
abnormally so. But, should that coldest air take a slightly
different trajectory, we may have to dial those temps down.

Cold front is moving across Matagorda Bay at 3 AM and will
continue to work its way off the coast and through the coastal
waters this morning. Areas of rain with embedded heavier
showers can be expected for much of the day today. North winds
will significantly strengthen and become gusty behind the front.
Advisory flags for the Bays and Gale Warnings for the coastal
waters will be in effect today and on into this evening, and
they might need to be extended into the late night through
early morning hours tomorrow. As the day progresses tomorrow,
the north to northeast winds and the rough seas will begin to
come down, and this trend will continue on into Thursday. A
more southwest to south to southeast wind direction can be
expected at the end of the week and on into the weekend. Look
for another cold front to move off the coast and through the
waters next Monday.

Several warm records were set yesterday as heat spiked ahead of
this strong cold front. Here is a summary of the records reached:

I've got a question that I've been meaning to ask. During winter, especially in areas where it's cold and snowing, there's a particular look to the clouds on radar. They appear to be more blurred, but striated. With the colder temperatures today, I'm seeing that (some) in our area. What causes that?
Top

.Aviation...
Ceilings should continue holding in the 600-1600ft range for much
of the afternoon as another band of shra makes its way across the
area from the west. Precip should be tapering off along the I-45
terminals 22-24z. Gusty north winds will persist into the evening
before beginning a slow downward trend inland, but remain up at
the coast overnight. Moisture trapped under the inversion should
keep ceilings between 1500-2500ft thru the night. Once the upper
trof axis pushes east of the area and mixing/column drying occurs
Wed morning we`ll see skies gradually clear out. 47

Gale Warning until 9 PM CST this evening for the following
zones: Brazoria Islands.

Wind Advisory until 9 PM CST this evening for the following
zones: Matagorda Bay.

This far out? No.
Just because you're disabled, you don't have to be a victim
Be Weather Aware & Prepared!
Barbara Jordan Winner in Media
Disability Integration Consultant
Top

javakah wrote: ↑
Tue Dec 10, 2019 12:20 pm
I've got a question that I've been meaning to ask. During winter, especially in areas where it's cold and snowing, there's a particular look to the clouds on radar. They appear to be more blurred, but striated. With the colder temperatures today, I'm seeing that (some) in our area. What causes that?

You are correct. It’s more common to see the radar returns like this in an overrunning pattern when you have the warm air quickly overrunning the colder air at the surface, especially with stratiform rain. There are several reasons for the ‘look’ but part of it is the radar beam is higher up and the precipitation is moving really fast, so it gives a larger precipitation signal on the screen.
Top

Waking up to the 3rd dusting of snow since arriving. So far there has not been any travel issues.

This weather is so boring. Winter might start becoming the most boring season for me. At least during the summer I can track tropical systems.
Top
Post Reply

Users browsing this forum: No registered users and 29 guests