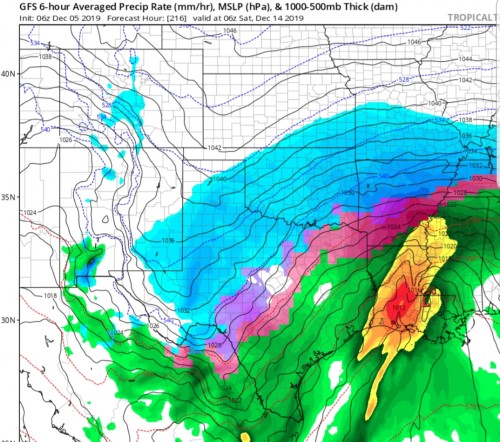 Euro isn’t onboard and also took away yesterday’s 12z rain event for next Wednesday. Have to pump the brakes on that 6z GFS run till it shows it a few more times and the Euro jumps onboard.
Top

Cpv17 wrote: ↑
Thu Dec 05, 2019 10:44 am
Euro isn’t onboard and also took away yesterday’s 12z rain event for next Wednesday. Have to pump the brakes on that 6z GFS run till it shows it a few more times and the Euro jumps onboard.


Just weather talk since this run was mentioned.
Top

Cpv17 wrote: ↑
Thu Dec 05, 2019 10:44 am
Euro isn’t onboard and also took away yesterday’s 12z rain event for next Wednesday. Have to pump the brakes on that 6z GFS run till it shows it a few more times and the Euro jumps onboard.


Just weather talk since this run was mentioned.

Yeah I feel you. Very boring weather pattern we’re in. Nothing at all to talk about.
Top

Expect VFR conditions to continue through the day at all sites
with just some high clouds filtering into the region through the
day. Two main aspects to focus on in this discussion, the fog
developing tonight and the frontal passage that is expected late
tonight into the early morning tomorrow. Moist southwesterly flow
ahead of the front will bring the threat of fog across the
southern portion of the region. This will mainly be impacting HOU,
SGR, LBX, and GLS starting around 9 to 12z tonight. The latest
guidance has the front coming through an hour or two later than
previously suggested. As of now it looks like the front will reach
CLL around 13z, IAH around 15z, and the coast around 17z. Really
no chance of rain with this front, mainly MVFR CIGs and northerly
flow behind it. With the slower FROPA, there is also a possibility
of some patchy fog getting up to IAH, but have left it out of the
TAF for this package. LBX will have the best chance for dense
enough fog for IFR or LIFR visibly in the early morning hours.
The fog will dissipate with the frontal passage, then expect VFR
conditions to return post front.

Onshore flow will bring in warmer conditions today. Expect partly
to mostly cloudy skies with temperatures rising into the mid 70s
this afternoon. Mid to upper level short wave will move eastward
across the Rockies and into the Central Plains later today and
tonight. Surface low pressure will track east-southeastward near
the Oklahoma and Texas border, bringing in a weak cold front
tonight through Friday morning. Today`s southerly wind flow will
transport low level moisture from the Gulf, but since it will be
short lived, PWAT values look to remain below 1.2 inches, and only
for a few hours, before the frontal passage. With the lack of
both moisture and instability, low chances of rain is expected
inland with the highest chances mainly along the coasts and Gulf
waters. There is, however, a good chance of fog development
tonight across portions of SE Texas, as well as the potential of
sea fog. More details regarding fog will be discussed in the
upcoming forecast packages. Once the front moves through SE
Texas, winds become northerly and drier air encompasses the
region through Saturday.

Forecast continues on track; no changes were made to the previous
package. 24

Calm and fairly seasonable conditions look to be in store for the
weekend as surface high pressure builds into SE Texas behind
tonight`s frontal passage. Lows on Friday night should drop by
around 10 degrees in the wake of the front, with offshore flow
supplying sufficient cold and dry air advection to lower
temperatures back closer to climatological normals (low 50s across
the metro, mid 50s along the coast, and upper 40s north of Houston).
Saturday is shaping up to be the most pleasant day of the weekend,
with highs in the mid 60s, light winds, and partly cloudy skies. By
Sunday, the surface high slides eastward, prompting a shift back to
onshore winds. We see an influx of Gulf air into the area as a
result, with associated WAA and moisture transport lifting Sunday`s
highs into the mid-70s and PWAT values back up around 1.25 inches.

Our next period of active weather comes on Monday night and Tuesday
as an upper-level trough approaches from the west and a cold front
extending from a surface low near the Ozark Plateau enters the
region. GFS, ECMWF, and Canadian guidance has come into slightly
better agreement regarding timing of these features, although upper-
level forcing still is slightly more progressive in the GFS
solution. Precipitation development along this front looks to be
more robust than in the past few events with showers and isolated
thunderstorms looking to initiate along the advancing boundary,
persisting through Tuesday as it reaches the coast. ECMWF solution
is currently the most aggressive in terms of rainfall coverage and
intensity. Have gone with mostly 30-40% PoPs in the forecast due to
the uncertainty still surrounding this period.

Drier conditions return to the area behind the frontal boundary with
offshore flow and surface high pressure returning by late Tuesday
and persisting through early Thursday. Rainfall chances look to ramp
up once again as winds shift back onshore towards the end of the
week.

.MARINE...
Patchy sea fog will be possible over Matagorda Bay early this morning
as light onshore winds return. As this onshore flow develops across
the entire Upper Texas coast, sea fog should become more widespread
until the next cold front moves into the area late tonight through early
tomorrow morning. Rain chances will be low with this front. Generally
moderate northeast winds in the wake of the front could prompt caution
flags by Friday night. Light to moderate onshore winds are set to return
Saturday night. The next cold frontal passage is currently forecast
for Monday night with moderate to strong offshore winds expected to
develop in its wake. 42

I still see a big change coming beginning next week and likely continuing until at least mid December. The ensembles pump up a big Western Ridge extending well N into Western Canada and the Arctic Circle. A very deep Central/Eastern trough somewhat blocked by a stout N Atlantic Ridge suggests to me an active and possibly chilly weather pattern develops and may well deliver multiple bouts of colder Arctic into areas along and East of the Rockies.

I am tracking what may be the first Major Winter Storm of the season for the Smokey Mountains later next week.
Carla/Alicia/Jerry(In The Eye)/Michelle/Charley/Ivan/Dennis/Katrina/Rita/Wilma/Humberto/Ike/Harvey

A big change on the way with tomorrows cold front. Near record highs in the 80s will be followed by temps dropping into the 50s and breezy tomorrow with rain. A slow warmup and lots of sun will make for another beautiful weekend. 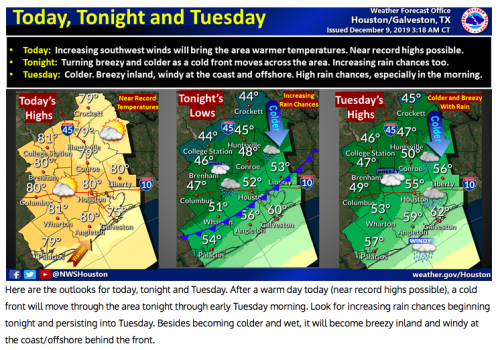 Strong cold front will move across the region tonight and early Tuesday.

Warm and humid weather in place this morning will continue for the next 12 hours or so before a strong cold front arrives late tonight and brings the area back into winter. High temperatures today will rise into the upper 70’s and possibly even the lower 80’s depending on how much sun can peak through the low level stratus deck and fog/haze in place. Near 70 degree dewpoints moving across the mid to upper 60 degree nearshore waters may result in sea fog formation…especially this evening as winds along the coast weaken ahead of the approaching cold front.

Lift increases starting late this afternoon and expect to begin to see shower development near the coast spreading inland. As the shallow cold front slices across the area overnight…lift will increase overtop of the incoming surface cold pool aided by the approach of a southern stream trough and jet streak. Numerous scattered showers will develop in the post frontal air mass late tonight into much of Tuesday. Will trend temperatures into the 40’s by daybreak on Tuesday and hold them there the entire day with ongoing cold air advection, clouds, and rain. Rain should begin to end from the west to the east late Tuesday afternoon and well before any threat of surface temperatures falling toward the freezing mark over our far northern counties by Wednesday morning.

Rainfall amounts look to average .25 of an inch up to around .75 of an inch across the region with the greatest amounts being along the coast and east of I-45 and the lesser amounts out toward the west and near College Station. It has become increasingly dry over the last month across the area (really since Imelda) with November having had a -3.22 inch rainfall departure at IAH…so we could use some rainfall.

Some recent social media posts have suggested there could be a slight chance of winter precipitation on Tuesday. A review of forecasted soundings show a significant layer of warm air from the surface up to around 700mb which will keep everything liquid in our area. Maybe a sleet pellet might mix in with the light rain around the Huntsville to Lake Livingston area Tuesday evening as the rain ends…but probably not.

With cold air advection still in place Wednesday morning and skies clearing some from the north…a light freeze may be possible in the Walker to San Jacinto to Polk County area with rest of the area falling into the 30’s and 40’s. Highs on Wednesday with mostly sunny skies will rebound into the upper 50’s and the air mass will begin to gradually modify toward the end of the week.

18Z Aviation...Expect MVFR ceilings to rise above 3 KFT at most
sites 19-20Z. Will see MVFR ceilings return as the cold front
approaches this evening. Expecting the front to reach CLL around
2Z, then IAH around 8Z, and near GLS at 11Z. Expect showers to
continue throughout the day behind the front on Tues. Ceilings
could fall to IFR across some areas on Tues morning. Sea fog is a
possibility at GLS late this eve through the early morning hours,
but confidence on this is not high. Wood

Expect breaks in the cloud cover today that should allow temps to
reach the lower 80s inland, especially across central and
southwest areas. There is a slight chance of showers this
afternoon; however, rain chances go up quickly once the front gets
in the area early this evening. Added isolated thunderstorms to
the forecast for southeast areas and offshore late tonight and
into Tuesday morning near the front and just behind it. A Gale
Watch is now in effect beginning Tuesday afternoon offshore for
frequent gusts above 34 kts.