The slopes in Montana would be buried and we’d have multiple rounds of wintry mischief opportunities down here.
Team #NeverSummer
Top

One of our local news stations is hinting at a possible light snow Tuesday morning...interesting...anyone else hearing this?
Top

snowman65 wrote: ↑
Wed Nov 06, 2019 5:17 pm
One of our local news stations is hinting at a possible light snow Tuesday morning...interesting...anyone else hearing this?

Some models have hinted at it. It comes and goes with each run.
Team #NeverSummer
Top

snowman65 wrote: ↑
Wed Nov 06, 2019 5:17 pm
One of our local news stations is hinting at a possible light snow Tuesday morning...interesting...anyone else hearing this?

Still 5-6 days out. Lots of things can and will change on the models. I think the cold is a pretty sure bet at this point, but it’s anyones guess on precipitation.
Top

The first cold front will move across SE TX today with widespread rain this afternoon. The weekend weather is looking very nice. A stronger cold front will arrive Monday afternoon resulting in highs Tuesday in 40s across most areas. 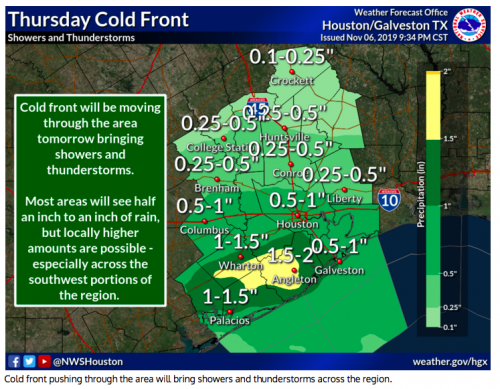 Cold front and wet weather today with lingering light rain and chilly air tonight will bring an end to the warm and muggy weather of late. Clouds and breezy winds will keep temperatures down on Friday.

Big changes ahead as our first Arctic Front of the season arrives Monday. A cross Polar flow allows for a chunk of chilled Siberian air to drop out of Canada into the Plains and settle all the way to the Yucatan Peninsula. It is very early for this amount of cold Arctic air to push this far South, but it is becoming clear that freezing temperatures may well be possible all the way to our Coastal tier of Counties at least by Wednesday morning, if not sooner. The Arctic boundary does bring another chance of rainfall Monday, possibly extending into early Tuesday. Some locations well inland may flirt with a wintry mix as the precipitation ends, but that part of the outlook is highly uncertain this far out and likely cannot be accurately predicted until Sunday or early Monday...at the earliest. Stay Tuned and gardening interests be prepared! It's not impossible that some Northern areas could see a Hard Freeze early next week.
Carla/Alicia/Jerry(In The Eye)/Michelle/Charley/Ivan/Dennis/Katrina/Rita/Wilma/Humberto/Ike/Harvey

here is what the disco says

With plenty of moisture available with this first frontal
passage, we should see relatively widespread showers and storms.
The best potential for rain looks to be nearer the coast, mostly
southwest of the Houston metro. In this area there is a very low
threat of excessive rain, where plentiful moisture could allow
the strongest of storms to produce rain rates up to an inch or
two per hour.
- The second front will bring another round of showers and storms,
but the bigger concern with this front is likely to be with cold
air behind the front early next week. Areas that have already
seen a freeze this season are looking more likely to see another
freeze behind this front, and some spots more coastward may get
a shot at their first freeze on the season.
Just because you're disabled, you don't have to be a victim
Be Weather Aware & Prepared!
Barbara Jordan Winner in Media
Disability Integration Consultant
Top

Yeah. There’s not really too much to talk about right now. Nothing interesting on the models for us anytime soon. We should have a normal fall front passing through on Thursday and maybe up to an inch of rain in spots of southeast TX this week. There’s a really big front on the models around next Monday, but the GFS and Euro both have the core of the cold missing Texas well to our east and we just get the edge of it here. Yawn.

Our neighbors in Louisiana might beg to differ with your "yawn". Rather chilly temperatures will accompany the deep Eastern trough.

Srain! Have you moved yet?

I have very much enjoyed the mild weather this week. Great running weather in the morning. Short sleeves during the day. I couldn’t ask for better weather. I wish it would stay just like this until May.
Top
Post Reply

Users browsing this forum: No registered users and 9 guests