Can't believe we are halfway through 2019 already. June marks the beginning of the Atlantic Hurricane season and as always this forum is on top of everything tropics!!! Summertime heat, humidity, afternoon Showers/T-storms. I have moved out of Sugar Land and up into Montgomery County recently so looking forward to monitoring from a new location.
~~~When Thunder Roars Go Indoors~~~
~~~Turn Around Don't Drown~~~
~~~Run From The Water, Hide From The Wind~~~
Top

ON SATURDAY JUNE 8th AT GEORGE R BROWN HALL A from 10-2
EXTREME WEATHER EXPO
Come and learn how to prepare for come what may
Meet our pro mets
Great swag from companies
Free Hot Dogs
Great Panel Discussions
ITS FREE - hope to see you there
I will be at the Mayors Office for People with Disabilities table
Come and see me!
Just because you're disabled, you don't have to be a victim
Be Weather Aware & Prepared!
Barbara Jordan Winner in Media
Disability Integration Consultant
Top

The overnight guidance suggests a potentially active and 'wetter' pattern developing next week as a West Coast upper low meanders East beneath a developing North Central United States Upper Ridge. Such a pattern suggests a chance of nocturnal thunderstorm complexes near N Texas/Oklahoma moving South for several days. The models also indicate some deep tropical moisture may move NW out of the Western Caribbean into the Western Gulf adding fuel for increased rain chances. We will see. 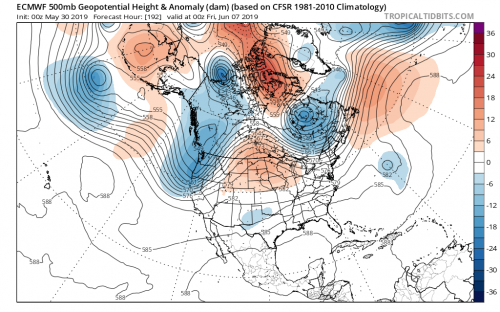 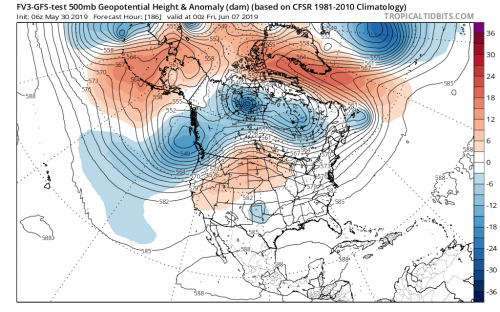 Yes! Welcome to the land of trees!!
Top

The first day or two of June look warm and relatively uneventful, but changes are brewing for next week. Our old friend the Central America monsoonal gyre appears to attempt develop an area of disturbed weather in the Bay of Campeche. The first impressive surge of deep tropical moisture from the NW Caribbean Sea is pulled NW in the Western and NW Gulf of Mexico. PW's of near 2.5 inches or higher arrive along the Gulf Coast early next week as a robust upper air disturbance moves in our direction from South California.

The afternoon computer models all hint at increasing rainfall chances and the ECMWF even attempts to spin up a weak low pressure system along the Lower Texas Coast that heads NE as that upper air feature treks across the Southern Plains. 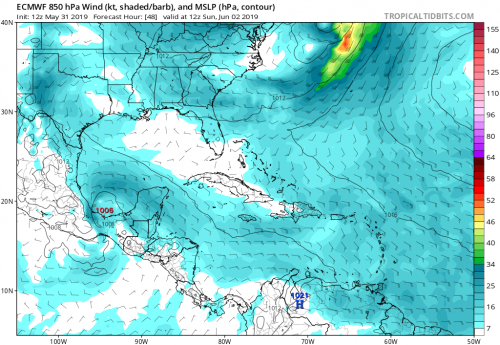 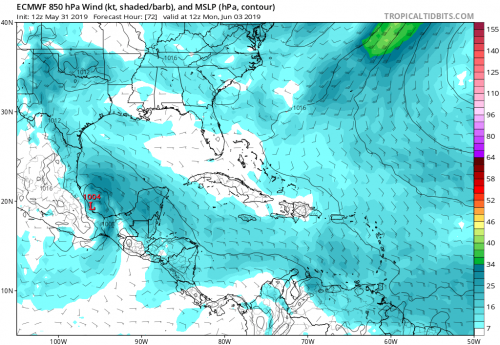 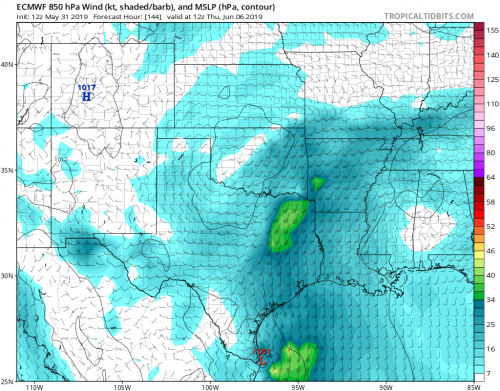 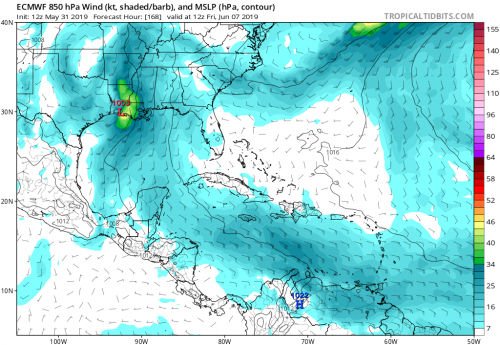 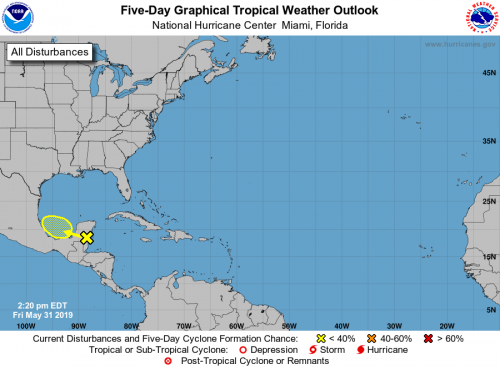 We now have an invest
Top

INVEST 91L was designated overnight for the SW Gulf area of disturbed weather. the NHC gives it a 50% chance of developing the next 5 days before it interacts with land along the Mexican Gulf Coast. Regardless of any development in the near term, unfavorable wind shear should keep the disturbance in check and increase our rain chances beginning Tuesday down the Coast spreading NE Wednesday into Thursday.

Early morning visible satellite images show a broad low pressure are is entering the eastern Bay of Campeche. Showers and thunderstorms have been fairly disorganized in association with this feature, but upper level winds are currently fairly favorable for some development as the low moves toward the W/WNW into the Bay of Campeche. Additionally, the land curvature of the south/southwest coast of the Bay of Campeche can help tighten these broad circulations.

Most of the global forecast guidance shows some degree of development with the system as it moves toward the eastern Mexican coast over the next 48 hours. The NHC currently indicates a 50% chance of formation over the next 5 days. The forecast becomes much more uncertain early next week as the tropical feature may move just inland over eastern MX or remain very close to the eastern MX coastline and then turn northward as the high pressure ridge over the NW Gulf breaks down ahead of a trough over the SW US. This is reflected in the ECMWF and its ensemble guidance, while other guidance has the weak feature inland over coastal MX.

Regardless of tropical cyclone formation and the eventual movement and outcome of any tropical system over the SW Gulf, the pattern is favorable by the middle of the week to advect a large pool of deep tropical moisture toward the state of TX. Rain chances will greatly increase starting late Tuesday into Wednesday and likely peak on Thursday. Heavy rainfall will be possible especially Wednesday/Thursday. For now will go with increasing tides and seas starting early next week as the long fetch ESE winds over the central and western Gulf will gradually build seas which may peak in the 6-9ft range by the middle to end of next week. Coastal water levels are already elevated and by the middle of the week high tides could be nearing 3.0-3.5 ft. This forecast is likely to change in the coming days as the Gulf system organizes and becomes better defined along with better available guidance.

As with any sort of tropical system in the Gulf it is important to check weather forecasts at least daily for any changes. 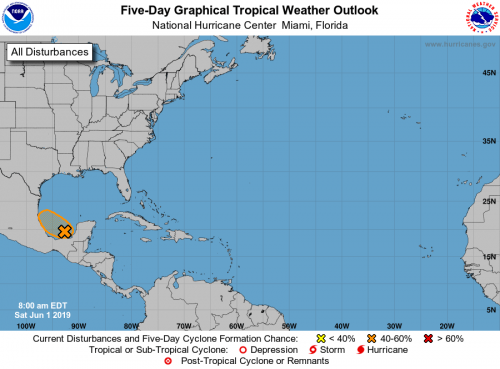