MAY 2019: Wednesday Storm Complex/Scattered Showers To End May

Looks like thats a wrap! Thanks as usual to all involved in relaying messages and keeping everyone informed and safe. Its been an eventful week! ...now time for a lazy wet dreary gray day nap. Cheers!
Mike
Beaumont, TX
(IH-10 & College St. area)
Top

Good news. The Flash Flood Watch for SE TX has been cancelled. Only areas of light rain currently that will be moving away from the Houston-Galveston areas this evening. A few lucky people may see a ray or two of sunlight during the sunset. Mother's Day will be a nice break from the wet weather. A well needed break for all of us after the last several days.
Top

Looks like 1-3” Tuesday on the SW side of the viewing area:

18z GFS has me here in Wharton County in the bullseye for Tuesday and Wednesday.

We are glad to be done with that stretch of heavy rainfall & flooding. Here's a look at some 5 day rainfall totals from MRMS data which gives a very close estimate of how much rain fell across the area. 2nd graphic shows a zoomed in look of some of the higher totals. #houwx #txwx 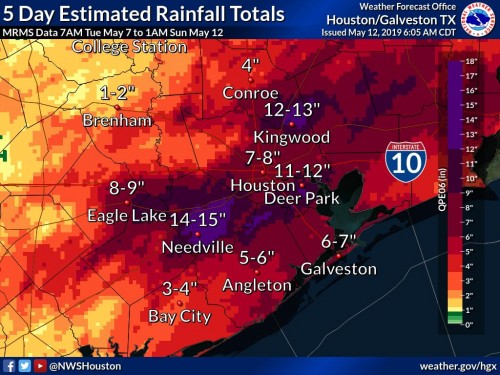 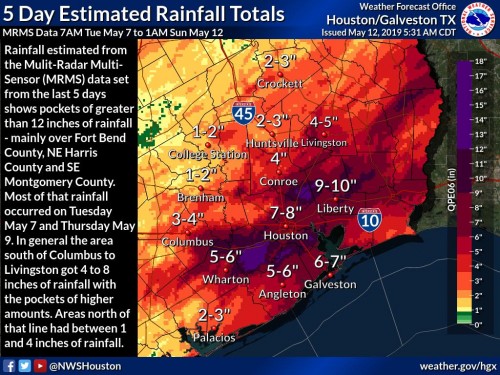 INTERESTING DISCO THIS MORNING FROM OUR HGX

Instead of a few highlight points on the forecast, we will offer
some post mortem/lessons re-learned thoughts on this past week`s
heavy rainfall and flood events.

- With a few areas getting more than 10 or even 15 inches of
rainfall in short periods of time like Sugar Land, Kingwood,
Pasadena/Deer Park, large hail with high rain rates on Thursday,
there were no flood related fatalities. Just think about that
for a moment.
- The Tuesday heavy rainfall event in which there was more than 10
inches of rain in Sugar Land and Kingwood reminds us how
challenging rainfall forecasting can be as no numerical guidance
came anywhere close to those kinds of rainfall totals or got the
location right. I will shout out to the 00Z May 7 Tuesday WRF-
ARW that indicated 4-5 inches of rain in the Sugar Land area and
stretching west towards Wharton. It was still off by 6-7 inches
of rain or more. However the WRF-ARW performed poorly the rest
of the time.
- Cell mergers, training of cells and storm scale interactions of
outflow boundaries are vitally important to rain rates.
- Weak to marginal upper level wind flow, especially diffluent
flow, helps maintain updrafts with some movement so that
updrafts are separated just enough from downdrafts but not
enough movement so that cell mergers can still occur to enhance
rain rates.
- None of these events had the support of a strong low level jet
or 850mb winds of more than 35 knots. Odd. Very odd. Now think
about what would have happened if there was.
- Thursday`s significant hail event on top of the flood potential
highlights again how hard it is to message multiple hazards.
- Storms becoming slightly more organized in line on Thursday
night that caused a bowing line segment was a silver lining in
disguise because it forced storms to move instead of develop
over the same areas. Because of this cold pool development and
bowing of the line segment, the heavy rainfall and flooding
impacts were not worse over Houston. This was probably one of
the factors that kept a flash flood emergency from happening.
- Thankful that high rain rates did not materialize Saturday. It
seems that Thursday`s convective event really worked over the
atmosphere and it took quite a bit more time for the atmosphere
to recover. There were still some training of cells Saturday but
not enough instability or moisture return to achieve higher rain
rates. It seems the main moisture axis and moisture transport
shifted east quicker than expected. Ask Louisiana about that.
Just because you're disabled, you don't have to be a victim
Be Weather Aware & Prepared!
Barbara Jordan Winner in Media
Disability Integration Consultant
Top

Happy mothers day to all the moms out there.
Top

According to the past few runs of the GFS, there doesn’t seem to be much going on for the next couple weeks. The Euro is completely different though. I wonder what the ensembles are showing?
Top

Cpv17 wrote: ↑
Sun May 12, 2019 11:29 am
According to the past few runs of the GFS, there doesn’t seem to be much going on for the next couple weeks. The Euro is completely different though. I wonder what the ensembles are showing?

The lack of consistency on forecast model and couple of weeks means little. I would wait another week.
Top

A rather cool May morning with temps mostly in the low 60s with a few mid to upper 50s inland. Another nice weather day across SE TX before rain and thunderstorms increase for the mid-week. This morning’s HOU-GAL AFD Summary:

- Rain chances come back into forecast Tuesday into Wednesday. We might see a strong storm or two SW of Houston.
- Added some 20 PoPs to Thur/Fri given warm air advection pattern and model consistency with some type of QPF developing.
- Weekend looking wet with a Pacific front moving into the area with precipitable water values 1.6 to 1.9 inches. May also have to watch for strong/severe storms.
Top
Post Reply