srainhoutx wrote:IF the overnight ECMWF and GFS are correct, a unusually strong Summer Cold Front drops South through the Plains into our Region next weekend. Instead of daytime highs in the low 100's like yesterday, we could see Highs in the low 80's and morning lows in at least the low 70's.

Still there on the 12Z on the Euro, GFS, and Ensemble. I sure hope that Lucy doesn't pull the football away. Yesterday's heat turned part of the lawn to straw in a day. Cinch bugs are feasting. Heavy watering last night and triazanon today. Ironically, the more "normal" summer had not "toughened up" the grass yet. At least St. Augustine eventually grows back.

Michael Ventrice‏Verified account @MJVentrice · 2h2 hours ago
Once our strong Kelvin wave passes the Atlantic, we are seeing two risk zones... one o/the Gulf of Mexico and the other o/the MDR next week.

.DISCUSSION...
Frontal boundary continues to make slow, but steady progress
across southwest zones early this morning. A thin band of shra/tstms
has once again developed along the windshift. Other than a few
lingering shra, most of this activity should be sw of the CWA and
in the Gulf by early to mid morning. Daytime highs today should
still be close to normal, but humidities will be lower than what
most are used to this time of year.

GOES-16 derived PW loop shows a tongue of higher moisture levels
situated along and south of the cntl La coast. Model guidance
depicts this making its way into the upper Tx coastal waters later
tonight and eventually inland Tue morning along with some associated
sct precip. Went ahead and nudged POPs up a touch south of I-10.

No significant changes to the ongoing forecast during the mid/late
week time period. Upper ridge is still expected to retreat westward
allowing a large broad trof to take shape over the eastern half
of the country. Locally, the weak surface front washes out and
deeper Gulf moisture will continue filtering back into the region
and bring a period of unsettled wx going into the weekend. Chances
of precip can be expected daily, esp across the southern 2/3 of
the region. It`ll probably follow a typical diurnal trend with
late night and morning activity near the coast spreading inland
during the day. However, there will also be some subtle,
hard-to-time disturbances embedded in the NW flow aloft to keep
an eye on as well. Medium range solns still bring a front close
to se Tx late Fri night. 47

.TROPICAL...
As just noted by NHC, Tropical Depression Six has formed in the
Gulf of Mexico about 75 miles west of Tampa Florida early this
morning. It should, in general, track eastward and is not expected
to bring any impacts to the upper Texas coast. 47

.MARINE...
Light to moderate NE winds are expected to prevail across the bays
and coastal waters today through tomorrow. These slightly elevated
winds/seas (mainly over Galveston bay/nearshore waters) should re-
main just under Caution criteria. High pressure lingering over the
northern MS river valley will help keep these generally light E/NE
winds in the forecast through at least late Tue. As the high moves
off further east...light SE winds are forecast to return by Weds.
Otherwise a series of weak upper level disturbances moving in from
NW during the remainder of the week and then a possible cold front
approaching this upcoming weekend will help produce periods of un-
settled weather across the marine waters these next several days. 41

.AVIATION...
Generally VFR conditions expected as light NE winds prevail in the
wake of the cold front. This slightly drier airmass is forecast to
remain in place through late Tue. Of minor concern are the SH/TSRA
still forming along this boundary itself as it slowly moves across
the far SW portions of the CWA. Given the prevailing upper pattern
not expecting this line to regress back into SE TX at this time. 41

Emily made landfall on Anna Maria Island as a weak TS.

I spent last week at Indian Rocks Beach and the weather was beautiful.
Top

A few showers and an isolated thundershowers are moving toward the Upper TX Coast across the NW GOM this morning. This is a sign of the GOM moisture return which will bring increasing rain chances though the rest of the week and through the upcoming weekend. 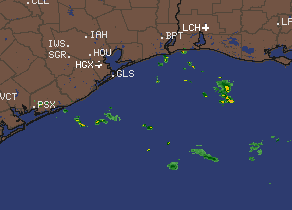 There is the mention of those two words again...music to my ears in August.

.DISCUSSION...
12Z Aviation...A few SHRA near the coast early this am. Expect
scattered SHRA to move inland a little later this morning. Do not
think we will see many if any SHRA as far inland as CXO this
afternoon. Expect more coverage tomorrow than what we see today.
NE winds will become SE later this afternoon, generally in the 5
to 10 KT range. 33

DISCUSSION...
Looks like an increasingly wet start for the week...with more wet
weather likely through much of this forecast. The isolated/widely
scattered activity currently over the coastal waters should cont-
inue to move into SE TX this morning and afternoon. The best rain
chances will remain along the coast, extending inland generally S
of I-10. The increased cloud cover will also help keep temps near
normal levels today.

Models keeping this upcoming forecast a wet one given the progged
pattern aloft. The building ridge off the U.S. west coast will be
producing a corresponding upper trough across the MS river valley
the next few days. The increasingly NW flow aloft will be drawing
a series of weak disturbances down into the area from the Central
Plains. This combined with the return of onshore winds and deeper
Gulf moisture appear to be setting the stage for scattered storms
these next few days. The elevated rain chances will remain in the
forecast through the weekend as another cold front approaches and
then stalls across the region. 41

MARINE...
Light to moderate easterly winds are expected today, becoming
southeast tonight. By mid-week we will see a weak gradient and
lighter and more variable winds as a weak cool front approaches and
weakens near the coast. Chances for showers and thunderstorms will
increase on Wed and continue through the weekend as a series of
upper level disturbances move across the area. Southerly winds and
seas are likely to increase slightly late next weekend. 33

Weak low is present in the central Gulf. Would go with 20% chance of development. Surprised Stacy Stewart didn't mention it in today's outlook, given what we just went through with Emily. Not much model support, but we have to keep a close eye on ANY such features in August/September. It will be moving northeast-east, not toward Texas.

srainhoutx wrote:The overnight guidance continues to advertise a cold front sagging South toward the Gulf Coast on Friday before pulling up stationary suggesting a prolonged period of unsettled weather as disturbances drop South from the Central Plains around the retreating Western Heat Ridge and abundant tropical moisture increasing with an onshore low level flow off the Gulf


A rarely seen precip prediction map in August in Texas without a discrete tropical system at play.
Top
Post Reply