With April fast approaching - will this current pattern continue or will spring be ushered in with warm temps and abundant sunshine.
Top

The overnight Ensemble schemes are suggesting an unusually strong Rex Block developing as we begin April. Typically such a signature in late March/early April suggests there may be a potential for severe weather across the Southern and Central Plains possibly followed by a bit of a prolonged period of unsettled weather particularly with a noisy and active sub tropical jet overhead. We will see.

Waking up this morning to some scattered showers and thunderstorms in the area Some gusty winds and possible small hail possible in the stronger storms. Another cluster of storms approaching looks to affect Harris, Ft. Bend and Montgomery counties in the next hour.
~~~When Thunder Roars Go Indoors~~~
~~~Turn Around Don't Drown~~~
~~~Run From The Water, Hide From The Wind~~~
Top

Upper trough to our West is generating enough lift for elevated thunderstorms this morning. Could see some pea sized hail with the stronger storms through at least midday as a disturbance moves across the area.

The cool front remains across the Upper TX Coast this morning with an approaching disturbance in the SW flow firing off some fast moving strong thunderstorms. Picked up .42" of rain and some intense lightning earlier this morning. Additional thunderstorm develop will occur during the day with the slow moving upper level trough. Some small hail will be possible in the stronger storms. The SPC has a marginal risk area across SE TX with a large slight risk area across the SE US. A beautiful mostly sunny, warm, and dry weekend on the way as the front moves offshore tonight and skies begin to clear. 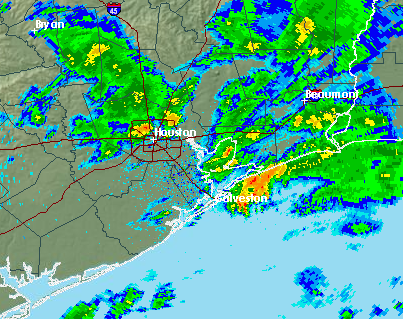 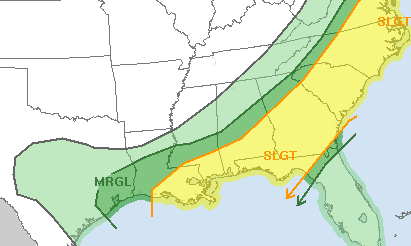 AT 1037 AM CDT...DOPPLER RADAR WAS TRACKING A STRONG THUNDERSTORM NEAR
DANBURY...OR 9 MILES EAST OF ANGLETON...MOVING NORTHEAST AT 45 MPH.

HALF INCH HAIL AND WINDS IN EXCESS OF 40 MPH WILL BE POSSIBLE WITH
THIS STORM.

FREQUENT CLOUD TO GROUND LIGHTNING IS OCCURRING WITH THIS STORM.
LIGHTNING CAN STRIKE 10 MILES AWAY FROM A THUNDERSTORM. SEEK A SAFE
SHELTER INSIDE A BUILDING OR VEHICLE.
Top

Lovely cooler temperatures today! Probably one of the last times to have the windows open and the a/c off.
Top

Are we experiencing aweather pattern change -looks like for the next week all the rain is northern US? Just curious!
Top
Post Reply

Users browsing this forum: No registered users and 13 guests