MAY 2019: Wednesday Storm Complex/Scattered Showers To End May

Glancing ahead to the long Memorial Day Holiday period, the Climate Prediction Center Experimental Long Range Outlook suggests a deep Western trough will continue and we are on the Western periphery of a strong SE Ridge where locations under that big High Pressure dome could see very hot temperatures and little in the way of rainfall. Texas looks to be in a weakness where rainfall could continue as May nears an end. 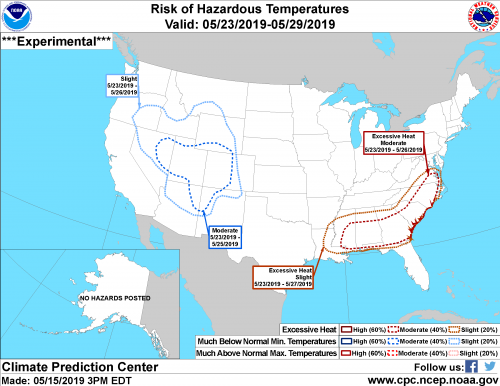 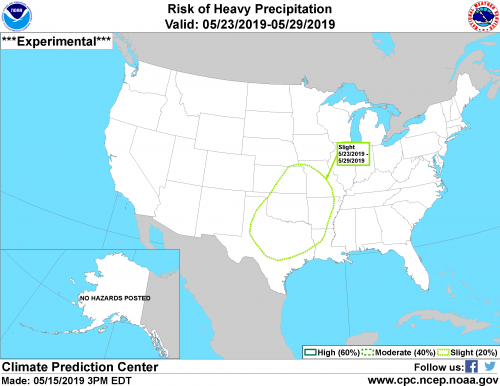 srainhoutx wrote: ↑
Wed May 15, 2019 2:01 pm
Glancing ahead to the long Memorial Day Holiday period, the Climate Prediction Center Experimental Long Range Outlook suggests a deep Western trough will continue and we are on the Western periphery of a strong SE Ridge where locations under that big High Pressure dome could see very hot temperatures and little in the way of rainfall. Texas looks to be in a weakness where rainfall could continue as May nears an end.

I hope so, but I fear not all of our area will see much rain. I’ve heard the southern half of the viewing area could be dry particularly the coastal counties.
Top

Now that it’s mid May our best chances for precip might have to come from the tropics via the Pacific or Gulf side. Cold fronts don’t have enough punch to make it this far south anymore.
Top

...THERE IS AN ENHANCED RISK OF SEVERE THUNDERSTORMS ACROSS CENTRAL
AND NORTHEAST TEXAS...

...SUMMARY...
Severe storms are possible over a large area Saturday, from Texas to
Iowa, with the greatest threat across central/northeast Texas toward
the Arklatex where a few tornadoes, hail and wind are possible.

...Synopsis...
Strong southwest flow aloft will exist over the Plains as a intense
embedded shortwave trough develops over OK and north TX during the
day and ejects northeast toward MO overnight. At the surface, low
pressure will generally exist over KS and OK and will develop
northeast into IA late. A moist air mass will reside ahead of the
low track and east of a cold front/dryline advancing across TX
during the day. The northern extent of any severe threat will be
delimited by an east-west stationary front which will remain roughly
from IA into PA. The greatest threat for severe weather will be
over central into northeast TX where instability will be greatest.

...Much of central and northeast TX...
Models continue to indicate an early batch of storms across
northwest TX Saturday morning, with substantial drying behind. This
may reduce severe weather chances across parts of OK and KS should
this occur. Otherwise, this MCS will continue to gain strength as it
pushes east across northern and central TX where 70s F dewpoints
will contribute to 2000-3000 J/kg MUCAPE. Ahead of this line of
storms, southerly 850 mb winds on the order of 40 kt will contribute
to low-level shear, with supercell wind profiles expected.
Therefore, both isolated cells or cells within a line are possible,
with damaging winds, large hail, and a few tornadoes. This threat
may extend as far northeast as AR overnight, depending on how
unstable it remains.

Farther north into IA, a pocket of relatively undisturbed air will
exist near the boundary, with scattered cells producing large hail.

NOTE: THE NEXT DAY 3 OUTLOOK IS SCHEDULED BY 0730Z 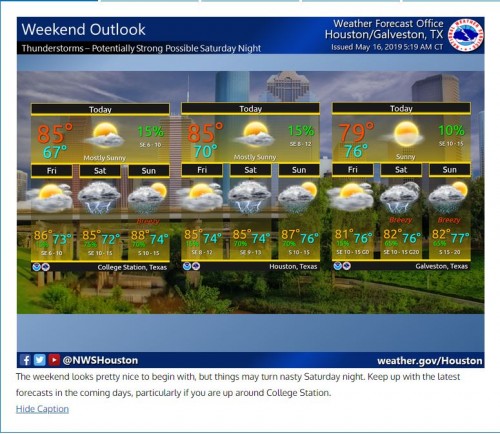 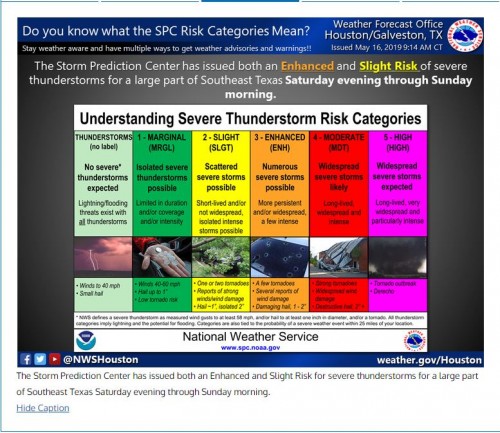 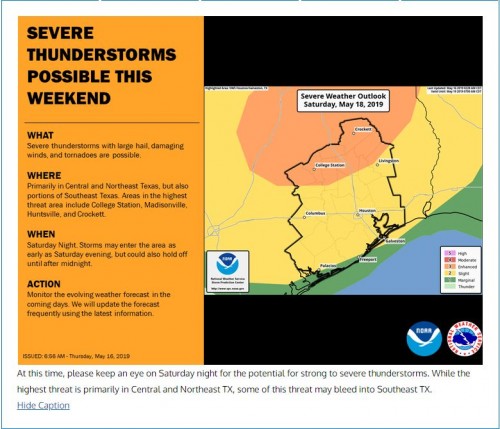 .AVIATION...
SCT to occasionally BKN clouds around 2000 feet are moving northward
across the area early this morning. Expect clouds to thin this morning
with VFR at all sites later this morning and on through this afternoon.
Still looks like best chance for SHRA/TSRA development today will be
in/around the LBX and SGR areas. Any activity that develops should
be gone by shortly after sunset. Might see MVFR ceilings develop overnight
and on into tomorrow morning. Mainly SE winds 5 to 10 knots today. 42
&&

Still expect a seasonable end to the work week, and while we may
not manage to stay totally dry, any afternoon showers and storms
are going to be pretty limited.

Saturday night into Sunday morning continues to be the time to
watch for more significant storms, and there is some potential for
severe weather and perhaps some locally heavy rainfall. Lots of
details to suss out on potential impact for our area. There are
still failure modes possible, but the top end threat could be
significant in the northwestern third of our area.

Guidance now shows one more upper disturbance working through
Tuesday night before ridging builds and looks to give us a bit of
a break from spring and an early taste of summer.

NEAR TERM [Through Friday]...

Not much to say about today and tomorrow, really. It will
basically be exactly what you`d expect out of mid-May in Southeast
Texas. Look for lows in the 60s north to around 70 degrees near
the coast, and afternoon highs around the middle 80s. The
seabreeze will be around to provide a focus for a handful of
showers and storms (more today than tomorrow), but I would expect
most to stay dry over the next couple days.

This weekend is a potential severe weather event that has been in
the making for much of the week. Earlier on in the week it looked
like a slam dunk big chase day in the Central and Southern Plains.
Now it appears the most significant storms may occur closer to
home.

Where we earlier anticipated one strong, deep, upper trough
digging to the Panhandles, there`s now pretty strong model
agreement in a bit of a split trough. One vort max will be up
north around Nebraska, while another digs south into the Red River
Valley. Along with this, an upper jet streak that had looked to
curl around the base of this trough now looks like it might be
oriented more to the southeast, pointed in the direction of
Southeast Texas. It`s a bit farther off than I`d "like" to see,
and we`re not exactly in a left exit region of this streak, but a
qualitative look seems to imply diffluence aloft. Without a real
strong front, the LLJ doesn`t veer to southwesterly until late
Saturday night, which means onshore flow (and likely an influx of
higher theta-e air) until storms firing off the dryline to our
west/northwest earlier in the day arrive. Thus, we should have
plenty of instability waiting for us despite storm arrival after
peak heating.

Now, despite several things pointing to strong storms, this is no
slam dunk, either. The NAM goes so far as to kill off the day`s
storms before arriving in our area, with a new line starting up
perhaps right on top of Houston and Galveston Bay, but not really
getting serious until it`s exited our area stage right. Our area
wouldn`t get more than some showers, maybe a rumble of thunder.
That`s a bit of a weird flex, but okay. If that`s what the
atmosphere wants to do, I`d gladly take it. I`m only able to
speculate as to what the failure mode is here, but given the
change in forecast scenario we`ve seen since the beginning of the
week, I`m not going to rule it out. But, for what it`s worth, the
CIPS analogs are not impressed with potential for rain in our area
Saturday night. It is...virtually dry.

Anyway, I was mildly surprised by SPC`s guidance tonight of
covering our northwestern third in an Enhanced threat area (level 3
of 5) along with a hatched area for significant severe. But on
the other hand, given the trends in the severe environment, it
appears to be a reasonable upper-end scenario for us at this time.
Progged precipitable water ranges from 1.7 to 2.0 inches, and
with enough shear for well-organized updrafts, the strongest
storms could drop an inch or two of rain real quick before moving
on. Expectation is for any line to be pretty progressive, so I
don`t know about widespread heavy rain/flooding concerns, but
localized problems would crop up if the rainiest storms fall on
the unluckiest places.

Because of the progressive pattern, things should clear out pretty
quickly, giving us a relatively benign Monday. However, where the
guidance used to build a monster upper ridge over us, it spins in
a new upper low from the northwest to hold that ridging at bay.
This one aims to dig into Texas as well, which will give us
another shot at showers and storms Tuesday night into Wednesday.
Am still awaiting the new extended outlook from SPC, but given the
current guidance, I would expect them to slide down or expand
their 15 percent risk area over Northeast Texas to the south
towards our area some. Like this weekend, with the new guidance my
confidence is not as high as it once was, and the lesson stares us
right in the face of asserting too much at long range. But, at
this time, it looks like we at least have a chance for some
stronger thunderstorms Tuesday night into Wednesday.

After that, the guidance is back to building big upper ridges over
the Southeastern US. I continue to skeptically keep forecast highs
below 90 degrees until I see evidence of this actually happening,
rather than simply being predicted in the 200+ hour range and
sliding further into the future with each model run. Should it
happen, here come a round of 90 degree highs later next week.
Either way, we`re pushing towards late May. Summer is
coming...it`s practically here!

Light to moderate onshore winds persist into Friday. Winds and
seas begin increasing during the day on Friday and on into
Saturday night as the pressure gradient tightens. Caution and/
or Advisory flags are a good possibility during that timeframe.
Tides will continue to run above normal. Will need to keep an
eye on forecast levels around times of high tide beginning Friday
night as some guidance still has them peaking near Coastal Flood
Advisory thresholds. Winds and seas look to build even more on
Monday and Monday night as the pressure gradient tightens up once
again. Flags will be needed. 42