I feel sorry for those still in the path of this system, nothing worse than severe weather at night
Top

Preliminary survey of Franklin Tornado suggests an EF-3 (winds of 140 MPH). Last time Robertson County had an F-3 was May 10, 1959.
Carla/Alicia/Jerry(In The Eye)/Michelle/Charley/Ivan/Dennis/Katrina/Rita/Wilma/Humberto/Ike/Harvey

Our next storm threat will be coming up in a few days. Timing right now for our area looks to be Wednesday evening into early Thursday morning as another low pressure deepens as it crosses the Rockies into the Central Plains swinging a trough through here. The SPC currently has a 15% for our area with a greater threat further north into NE Texas up towards the Midwest. This will get fine tuned as we get closer as there are still some kinks to work out. Nonetheless, Spring is making itself known.

...DISCUSSION...
Models have come into much better agreement through the medium-range
period as compared to 24 to 48 hours prior. Both now depict a
strong upper trough moving out of the Rockies and into the Plains
Day 4 (Wednesday 4-17), eastward into the Mississippi Valley region
Day 5 (Thursday 4-18), and then across the Ohio and Tennessee
Valleys Day 6(Friday 4-19). This system will be accompanied by an
associated/well-developed surface low and frontal system, with the
low progged to begin occluding Day 5 over the upper Midwest region.
The cold front is currently expected to reach the Appalachians by
the end of Day 5 (Friday morning), and then continue eastward to the
coast through Saturday morning.

Once the front clears the coast, surface high pressure residing over
the Gulf of Mexico in the wake of the front and a weaker upper
pattern suggests a relative lull in severe potential Days 7-8 (next
weekend).

Meanwhile however, as the system emerges into the Plains Day 4,
strong -- though somewhat meridional -- flow accompanying the system
should combine with an amply moist/unstable warm sector to permit
storm development, within a zone of ascent focused near the
low/front. Though models differ somewhat with respect to the
position of the surface low, a somewhat bi-modal risk may evolve --
with one relative maximum near and ahead of the surface low where
directional shear should be greatest (currently expected in the
vicinity of Iowa), and a second from the southern Plains eastward
into the Ozarks/Arklatex where the most substantial CAPE should
evolve. Large hail and damaging winds are expected, along with some
tornado risk -- especially nearer the surface low/warm front.

As widespread convection develops through the overnight hours, and
shifts eastward, a more complex forecast becomes apparent due to the
effects of the precipitation and associated cloud cover an
warm-sector destabilization for Day 5 -- and similarly for Day 6 as
the expansive area of convection continues advancing eastward toward
the Atlantic Coast. While details with respect to severe risk are
therefore difficult to highlight this far in advance, large 15% risk
areas will be maintained, given the strength of the upper system
which will provide a kinematic field favorable for severe storms
atop a warm/moist pre-frontal airmass.

For anyone interested, here is a sounding issued out of College Station yesterday when the tornado over Hearn was occurring. Notice how the cap had weakened enough and low-level shear had increased enough to provide plenty of rotation. Also shows how important that 0-1km shear is for the formation of tornadoes in general. 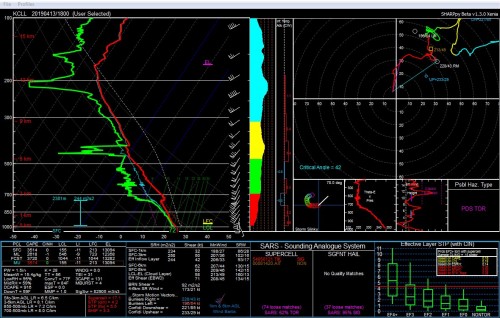 Models are starting to come around to what looks like a wet pattern ahead for the rest of April. Could be looking at a big time severe weather threat late Wednesday/early Thursday across all of the viewing area.
Top

...THERE IS AN ENHANCED RISK OF SEVERE THUNDERSTORMS FROM PARTS OF
EASTERN OKLAHOMA AND WESTERN ARKANSAS SOUTHWEST ACROSS PARTS OF
CENTRAL AND EASTERN TEXAS...

...SUMMARY...
Strong/severe storms are forecast Wednesday afternoon and evening,
from the Iowa vicinity south-southwest into the southern Plains.

...Synopsis...
A gradually strengthening upper trough will move out of the Rockies
and into the Plains Wednesday, and will be the primary feature of
interest this period. Flanking the trough, ridging will encompass
the western and eastern portions of the country.

At the surface, a weak low initially over Kansas is forecast to
shift northeastward to Iowa by sunset, and then into the northern
Illinois/Wisconsin area overnight. Along a trailing cold front,
models forecast weak secondary/frontal low development over the
southwest Oklahoma vicinity during the afternoon -- likely near the
intersection of the front an a southward-extending dryline. This
cold front and dryline should focus late afternoon development of
strong/locally severe storms.

...Portions of the central and southern Plains east to the lower
Missouri/mid Mississippi Valleys...
As low-level moisture spreads gradually northward on southerly flow
ahead of the advancing storm system, steep lapse rates associated
with eastward advection of an elevated mixed layer will result in
development of a moderately unstable but capped warm sector.

Capping should hinder convective development -- particularly over
the southern Plains -- until late afternoon, but expect storms to
eventually develop along the cold front, and southward along an
eastward-mixing dryline as ascent increases in advance of the
strengthening upper system.

With flow aloft forecast to gradually strengthen as the trough
advances, shear sufficient for supercells will reside across much of
the area by afternoon. As such, developing storms will likely
become quickly severe given the degree of CAPE expected, with very
large hail likely to be the primary severe risk. Greatest risk for
the largest hail appears to exist across the southern Plains, near
the axis of steepest lapse rates associated with the elevated mixed
layer advecting northeastward from northern Mexico/New Mexico.
Damaging wind gusts will also be possible locally, and a tornado or
two cannot be ruled out. Convection will continue overnight --
spreading eastward toward the Mississippi River, but severe risk
should gradually diminish overnight.

Looks like roughly the same areas have been under the gun for the last 3 severe events.
Top

Is it just me or does it seem like severe weather last several springs are further north and we catch only the very tail end line...Certainly not begging for it, just seems further north than always before. Like we’ve shifted somehow.
Mike
Beaumont, TX
(IH-10 & College St. area)
Top

djmike wrote: ↑
Mon Apr 15, 2019 7:17 am
Is it just me or does it seem like severe weather last several springs are further north and we catch only the very tail end line...Certainly not begging for it, just seems further north than always before. Like we’ve shifted somehow.